A Little Change Can Do a Lot of Good

A Little Change Can Do a Lot of Good

"Without deviation from the norm, progress is not possible."
- C.D. Jackson

I've encountered quite a bit of change in my life recently. Since my last blog, The World is Before You..., I turned 30 years old, I proposed to my girlfriend of 3 1/2 years, and I had my first massage in more than 12 years. Although none of these seem to share significance, they each have led to advancements in my life.

My 30th birthday was a new milestone of finishing my third decade on this earth, and with most milestones, it makes you think, which often leads to change. Many would argue that any form of change is considered progress. For me, turning 30 is a big part of my personal and professional life, as it gave me an opportunity to reflect on how far I've come, and where I want to go. Two weeks into being 30 years old and it hasn't lead to any significant changes in my professional life, however it has given me a renewed energy on where I want to go in the next 30 years.

In my personal life, on the other hand, a significant change has occurred from something that many would think is not much of a deviation from the norm. As I mentioned, my girlfriend and I had been dating for more than 3 1/2 years, and after that amount of time certain things start to seem inevitable, such as a wedding proposal and wanting to spend the rest of our lives together. To the common male (such as myself) one would think that an engagement ring is really more a symbolic gesture, rather than a game-changer. This symbolic gesture, however, has positively changed our relationship as a whole, with a stronger sense of unity and a greater motivation at a better life together moving forward. Anything that can cause this kind of positive impact is certainly a welcomed change, and shows that this "deviation from the norm" has already caused huge progress in something that otherwise seemed fine as it was.

My most recent deviation from the norm was something as simple as getting a massage. While recently visiting Phoenix to do a seminar sponsored by Business Wire, we went to visit the home base of Canyon Falls Spa & Salon, which is a client of BannerView.com that also has a Las Vegas location. After taking a tour of their impressive facility we were offered to come back the next day to experience what the spa had to offer. I was originally hesitant as I hadn't had a massage in more than 12 years and it was outside of the norm, not to mention, we were in Phoenix on business, not for pleasure. After being coerced by my new fiance to do a couple's massage, I was once again pleasantly surprised by the outcome, feeling rested and relaxed. After my experience, I would recommend that anyone pamper themselves from time to time at a spa - results may vary.

What I'd like anyone reading this to take from my experiences is that whether personally or professionally, don't cheat yourself of greater things because it deviates from the norm, because without that, progress is not possible. 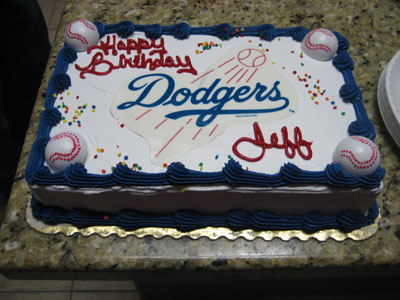 I may be 30, but I'm still a big kid when it comes to birthdays and the Dodgers! 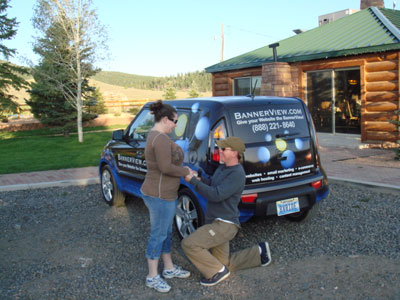  This wasn't actually the original proposal,
but we couldn't resist the photo op in front of the BannerRide! 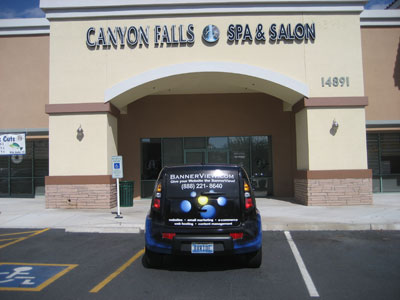  The BannerRide in Phoenix while visiting Canyon Falls Spa & Salon