Are You an Entrepreneur?

(06/26/2012) Jeff R. Helvin
"There is only one definition. An entrepreneur is someone who gets something new done."
- Peter Drucker 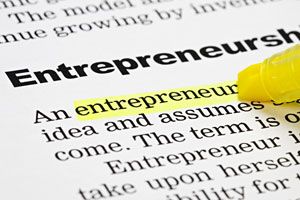 One of the things I love most about my business is working with a never-ending supply of entrepreneurs. Building websites is a prime business to be in if you want to work with entrepreneurs because every great idea needs a great website to support it. However, as stated in the quote above, an entrepreneur isn't just someone who comes up with great ideas, but is also someone who gets something new done. There’s a difference between being creative and being innovative. There’s a difference between being a thinker and being a thinker who acts upon his thoughts. According to Wikipedia, "an entrepreneur is an enterprising individual who builds capital through risk and/or initiative."

It's important to understand the definition of an entrepreneur if you claim to be one. It's also important to understand the definition of entrepreneur because I believe more of us should be one. As a business owner, and a COO, I don't fall into the trap of complacency because I'm consistently involved in the day-to-day decisions requiring me to get things done, often times, getting new things done. Businesses continue to evolve and while I may not come up with all of the ideas, I'm certainly a big part of getting them to be realized. If you're not in a position that has the same degree of responsibility, then you may find yourself getting comfortable with the daily routine that is work, and in so doing, lose out on growing your skills and profession. Be more like an entrepreneur and get new things done and you’ll derive benefits you never before considered.

With the Wikipedia definition of entrepreneur provided above, it sounds like it’s describing a business individual, or is at least relatable to one’s career or workplace. However, you can be an entrepreneur in your personal life as well. The term capital described by Wikipedia is in relation to economics, but the definition "a factor of production that is not wanted for itself but for its ability to help in producing other goods" can be applied to your daily lifestyle. Loosely translated, this could mean that what you do personally can be channeled towards being more productive; the result being your having added a new dimension to your life. If you act more like an entrepreneur and work at getting something new done, you may find yourself evolving much more personally, than you ever knew possible.