Where Can You Be Innovative?

Where Can You Be Innovative? 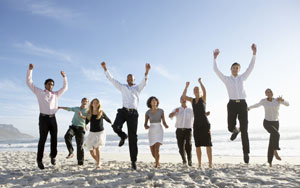 Too many times we get caught in a decision where we think the answer is either this or that; meaning that there is only one choice when presented with a decision. I happen to be a big believer in tried and true methods...to a point. Today, the world seems to be so much more dynamic than it used to be. There are less one-size-fits-all approaches out there, and while something may be good in theory, the actual application of it may need to modified for it to work.

Basic business strategies have long been tested and proven time and time again. In most cases, it's really just a numbers game. If you reach out to X number of people, then you will likely get Y responses, in which you're likely to do business with Z% of those who responded. The tricky part, today, is that there are so many more ways to reach people, so many more ways for them to respond, and so much more to do with them once they have responded. As a result, it's important to understand that a formula, alone, is not enough to gauge the potential success of an initiative. All of the pieces that go into it, such as the message, the target audience, and the way in which they respond, can play a dramatic role in the numbers you return. It's important to not shy away from being innovative, but it doesn't mean that the basic formula of what once applied may not still hold true. It's not that you're discounting the old, it's more that you're willing to try something new.

As in business, the same holds true in our personal lives. "The American Dream" is a good example of something that has been carried down for generations. The general concept of the American Dream is the opportunity for prosperity and success through good old-fashioned hard work - those who are willing to work hard for what they want can achieve it. Today, there appears to be a much different picture of the American Dream. With what you hear in the media, it sounds like prosperity and success are measured in the number of dollars you're worth, and that it’s more important to have a good idea and knowing the right people, than it is to work hard at something tangible and you believe in. It seems like hard work no longer applies, when really that isn't the case. Not all people who work hard achieve what they consider prosperity and success. After all, they may not be working hard at the right things to get them where they want to go. Understanding today's world, and being innovative in your approach to achieve what you want out of life, just may be the formula you need to achieve what you interpret as prosperity and success.

Whether in business or in life, innovation can be the key to unlocking your true potential in today's world. This doesn't mean you're abandoning "the old," it just means you're embracing "the new."