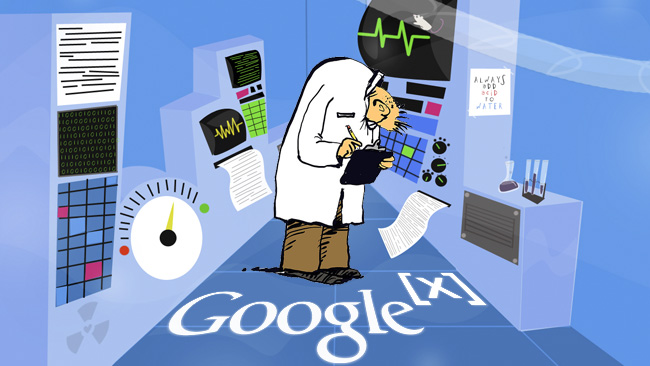 Google is not your ordinary tech company, so you wouldn’t expect Google X to be any less ordinary. So “extra” ordinary is the lab that a number of employees do not know that the lab even exists. Much like their core business of search, the lab pushes the boundaries of what we believe are the limits of technology. Looking at the projects currently in production and in future development, Google X proposes to usher in a new age of innovation.

Driverless car
The lab opened in 2010 with the self-driving car. A.I. software is employed to sense anything near the car and mimic the decisions made by a human driver. Seven test cars have recently driven 1,000 miles without human intervention and more than 140,000 miles with only occasional human control. Once through the vehicular legal hurdles, we may soon see or, more accurately, not see a driver behind the wheel.

Augmented reality glasses
Google Glass displays information in a hands free format. Glass wearers communicate with the Internet through voice commands. Including a touchpad and camera, the device has been the touchy subject of debate. Issues of privacy have sprung up about its use in public. As with any new technology, acceptable uses will be debated by both sides.

"The goal of an X project must be that it addresses (and hopefully solves) a problem that affects a substantial part of the planet’s population."

Meant to help diabetes patients keep track of their glucose levels, Google hopes to replace the typical method of pricking a finger and testing blood droplets multiple times a day. Though far from complete, Google continues to work with the FDA as well as pursuing partnerships with experts in the health industry.

Space elevator
Designed to permit vehicle transport along a cable from a planetary surface, such as the Earth's, directly into space or orbit, without the use of large rockets, Google X recently came out and said that the technology to make this happen was still years away.

Hoverboard
Yes, it’s like the one in the movie, Back to the Future. Using magnets to keep the hoverboard aloft, the magnets tended to shift polarities, causing the hoverboard to constantly flip over. Though most of these project would seem to be of science fiction, the Google X lab want to make them reality. The hoverboard may have been an experiment, but the data collected can be applied to other projects.

The goal of an X project must be that it addresses (and hopefully solves) a problem that affects a substantial part of the planet’s population. It’s here that Google focuses on what is called “The Web of Things.” Not only does Google want the Internet fast, it wants it everywhere. Whether in the home, office, in the car (driverless or not) or outdoors in some capacity, Google feels it benefits whenever or wherever someone uses the Internet.

The X-Men and X-Woman of Google put their inventive thinking caps on to provide the world with technology that hopefully betters lives. The growing list of projects keeps the secretive lab abuzz with interest from the tech community. With each new project, the future feels so much closer than before.