Just How Much Media Do You Consume? 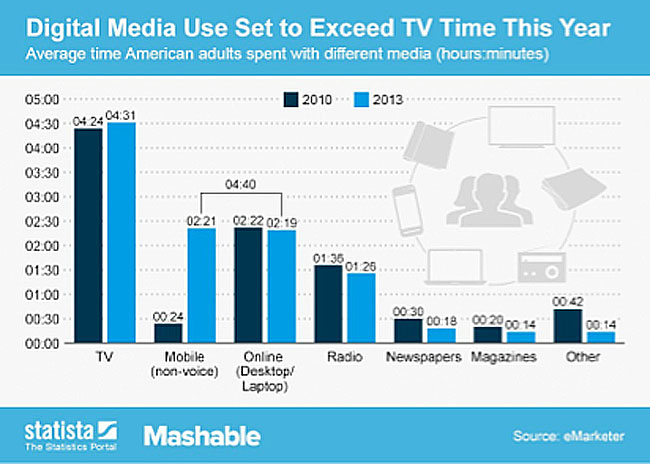 Media consumption has been a hot topic over the last decade. Keeping tabs on where everyone stands in this technological craze is imperative in regards to your future business decisions. As of now, the movement is a mad rush towards mobile. Are you ready for it?

Think about it! When you need to look up a person’s address do you pull out the humongous phone book that was dropped at your doorstep in the beginning of the year? No! Why would you even want to spend your time flipping through the thousands of pages? It’s much easier to simply type in someone’s name and find their contact information in any one of the multiple online directories.

Just got paid? It’s all too easy to take a picture of the check and deposit it via mobile banking. Why would you waste the time driving to the bank and dealing with the lines?

Gone are the days where we reset the odometers on our cars as we retrace steps in order to figure out just how far we ran on our workout. We now have apps for that, or specialized bracelet, shoe clip, or arm band devices.

Mobile has made it all too easy to carry out some of the day to day tasks in the most time efficient and convenient manners possible. It is all too common to play games, email, shop, read, listen to music, check the weather, and watch television from our smart phones or tablets. We can complete these tasks while on-the-go and simultaneously across multiple devices.

According to an eMarketer study released in August, “the average adult will spend over 5 hours per day online, on non voice mobile activities or other digital media this year, compared to 4 hours and 31 minutes watching television”.  While daily television consumption is dropping, digital media consumption is over 15% above what is was last year. It has surpassed television indicating that mobile is where your company’s focus should be.

In the below image from mashable, you can see that in 2010, Americans spent a mere 24 minutes a day consuming non-voice media on their phones. In 2013, this figure skyrocketed to two hours and 22 minutes of mobile consumption (over five times higher). Consumers are actively seeking ways to entertain themselves or complete day-to-day tasks on-the-go. These numbers are only projected to go up in the foreseeable future.

Business Insider points out that tablet shipments have grown 83%, while PC shipments dropped 13%. In addition, they show that search is also becoming increasingly mobile. Tablets and smartphones now account for 26% of all local search traffic. That means one in four of your website visitors is looking up your products or services from their phones and tablets.

Due to these statistics, it is essential for you to have a mobile friendly website. This means it should be responsive to the different devices used to find it. If you have a separate website or one that does not pull up correctly, you are losing a lot of potential clients.

Overall, multiple studies online are pointing to the fact that the typical American spends between 11-12 hours consuming media each day. This has been questioned, (due to the fact that some studies count 2 hours for 1 hour spent simultaneously watching television and playing on an iPad) but is very understandable with the way media has made its way into schools and the workplace.

Media consumption plays a large role in the consumer market and is a force not to be reckoned with. Make sure your company is on top of their marketing methods and able to cater to what’s trending with your target market; in this case, mobile.