So What’s This Bitcoin Trend? 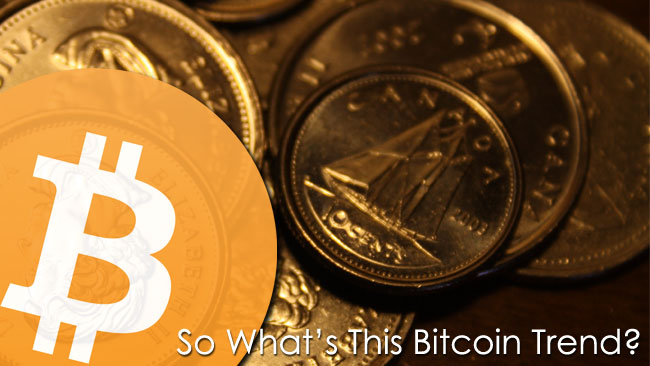 If you have been paying attention to recent news stories, bitcoins have been a hot topic. Used as an alternate method of currency, this outside banking digital trend has been taking off. Consumers are able to make use of bitcoins at hotels, universities, coffee shops, online stores, and the list is growing. Just what is bitcoin and how does it work? Read on to find out.

What is it?
Bitcoin is a digital form of currency used to make transactions an easier process. It is separate of the government or banking industry and operates as open source (meaning nobody owns it). Thus, when money is transferred, it is transferred person to person. The network is free to use, unregulated, and a vastly growing method of payment.

How does it work?
Bitcoins are stored in digital wallets that exist either in cloud or a user’s computer. The wallets act similar to online banking accounts in that they allow for saving, spending, and receiving bitcoins. However, they are not FDIC insured. There are over $1.5 billion worth of bitcoins in circulation and millions being exchanged on a daily basis.

What are the benefits?
The benefits are numerous. The network is free. Additionally, since it isn’t a bank, there are no fees, the currency works internationally, there aren’t prerequisites, and your account can’t be frozen. From a business standpoint, there are no charge backs and very minimal fees to accept and complete the transaction. There are also several currency exchanges that will allow you to exchange your BitCoins for dollars, euros, and other options.

What are its drawbacks?
Outside of the banking system, the currency is hard to trace. It is also a bit volatile with the market increasing and decreasing sharply in value. One of the major concerns as with most technology is security. Being an online currency method it is vulnerable to hacking. Servers have been hacked resulting in client’s bit bit coins disappearing. Also, you could have your bit coins accidentally deleted or destroyed by viruses.

Legal systems are finding it necessary to learn and understand the process of this newer currency due to its appeal to those committing illegal activities such as drugs and child pornography. This appeal is brought on because of the anonymous purchasing options it provides. When purchases are completed a log exists of wallet IDs, but names of buyers and sellers are not revealed.

Conclusion
Bitcoins are still a fairly new concept. However, they are maturing and being accepted at a much quicker rate than when the dollar or pound were first introduced. They have risen value by 1,000 percent over the past month. Once more merchants begin accepting them as sources of payment the value of a bitcoin will begin to stabilize. One thing is certain, many changes will occur as regulators begin to understand and work with this new form of currency. Governments are already seeking methods to gain taxes from the transactions.

For further insight on this growing industry, President & CEO of BannerView.com Mark Cenicola offers his views on the Bitcoin Industry.