Apple and the Public’s Perception of the Tech Giant 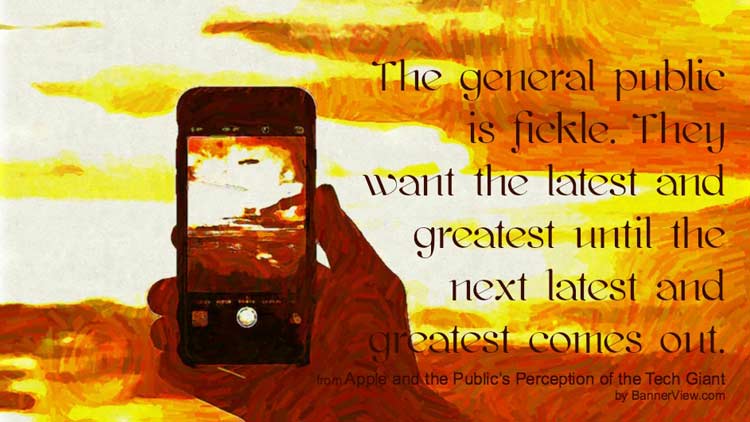 Another Apple event has come and gone. With it, so has almost everyone’s fascination with the tech giant. Why is that? For business owners, that should actually be good news and here’s why.

Once upon a time, Apple pushed the tech envelope; first in music, then in communication. Nowadays, it seems just about everybody but Apple commands the general public’s praise. Though the days of Steve and “One more thing…” are a distant memory, business owners should look at the consistency of the platform.

What do I mean by this? The general public is fickle. They want the latest and greatest until the next latest and greatest comes out. That usually drives business owners crazy, as I’m sure it does when Apple reads the reviews following their event. You’ll hear, “Aw, Google’s already doing that,” or “Man, that is so yesterday. My Samsung is better than that.” Sure, I’ll admit that I was a little disappointed that we didn’t get some major surprise, but that was to be expected.

Though the public expects new and exciting, business owners prefer the same and reliable. If something changes to the extreme, then businesses are left scrambling to adapt and catch up. For example, look at Microsoft Windows when they announced that support for XP was going away. You’d have thought that the world was ending from the uproar that followed. Partly, that was Microsoft’s fault. Whereas Apple pushed owners to upgrade more frequently, Microsoft continued to carry late adopters to the detriment of their own business.

With the economy in its current state, I think all businesses, including Apple are playing it safe. It’s a smart play. Speaking from the web design industry side, there are still businesses that have yet to develop a presence online. In the Twenty-First century, that’s limits growth if not kills a business altogether.

Apple probably has plenty of tricks up their collective sleeve (as does Google). The other issue that possibly the public doesn't realize is that outside entities can also limit expansion. It was mentioned that the new Apple TV didn’t include any real expanded offerings from Cable TV. Of course it didn’t. The cable industry sees its grasp slowly loosening and wants to retain their piece of the pie for as along as it can (Shades of the Music industry).

Government regulations also play a major part in the lack of technological growth. When compared with the infrastructure found in certain European countries and Japan, the U.S. is in a sorry state. It’s probably why Google has focused on developing its own fiber network among their many projects.

Though it may have been somewhat disappointing, the Apple event still showed that they’re in it to win it. They still cater to the consumer/artist community as the iPad Pro shows. The tvOS offers a new world for developers to play in. And the iPhone continues to remain a steady platform for computing on the run.

I think that’s a perception that Apple can live with.