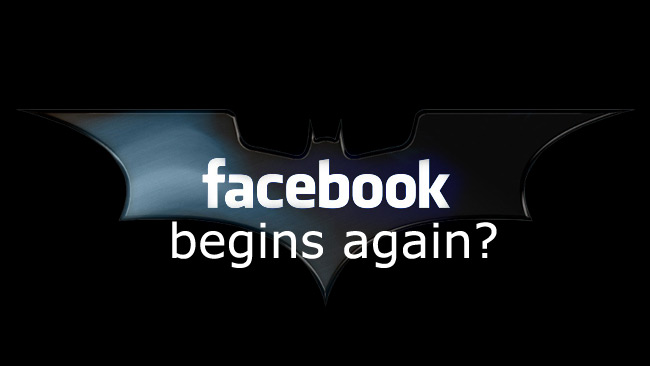 I was saddened by the event that transpired in Aurora, Colorado this past weekend. I pray for the families affected and hope that the actions of one clearly disturbed individual do not keep you from living your life. Do yourself a favor and go tell a loved one that you're thinking of them.

The movie, "The Dark Knight Rises" features Batman battling against insurmountable forces. Facebook should take a cue from the Dark Knight.

Facebook is facing a crisis. The social network has been hit by various villainous forces over the past few months. From continued outrage about user interface changes to a poorly received IPO, Facebook now experiences a customer satisfaction rating of 61, down from 66 last year. Compare that to newbie, Google+, which earned a rating of 78. It may explain why Mark Zuckerberg has that look of annoyance on his face most of the time.

Facebook Falls
In the short history of today's current iteration of the Internet, we can look back and see familiar patterns emerging as Facebook experiences a similar downward spiral. Why the repeat of history? In my opinion, it comes down to two things: not understanding your customer and not adapting to innovations in technology.

Yes, Facebook has customers. We may have free use, but without our use, Facebook is one big, vast wasteland (see Myspace). As no social network to date has developed an effective way at producing revenue other than advertising, we trade open use for ad space.

The other fly in the ointment is Facebook's unfathomable inability to produce a "likeable" mobile experience. Because of this, the company has lost favor with some of their game and app developers who have moved to solely producing for the iPhone and Android platforms.

The social network, being a large scale platform, has trouble quickly adapting to trends in technology. Think of a battleship doing a 180 turn and you can quickly envision why. The exponential growth of mobile devices has and continues to have repercussions in the business community.

Google Crawls
Amazingly, Google recognized this early on, bided its time and came out with possibly the next step in the evolution of the social network. The Google+ mobile app offers an impressive layout that takes advantage of a key element in successfully going mobile; clear communication.

From a streamlined interface to video conferencing abilities, Google+ is everything Facebook was and should be once again. How did Google pull an "end run round" Facebook? One word; data.

Advertising is currently Facebook's bread and butter. Access to site analytics would naturally be favored by marketers. Unfortunately, Facebook Insights is no Google Analytics and Google knows this. Again, Google's patience paid off as it sat, watched and learned before the launching of its competing product.

What does the future hold for Facebook? We may get some insight with the relaunch of Myspace as a platform from which musicians could run their businesses and manage their brands. If successful, Facebook may be able to turn it around. If not, maybe then it's time to call Batman.