The Spider Crawls in "The Buzz Gets Bumped Off!" 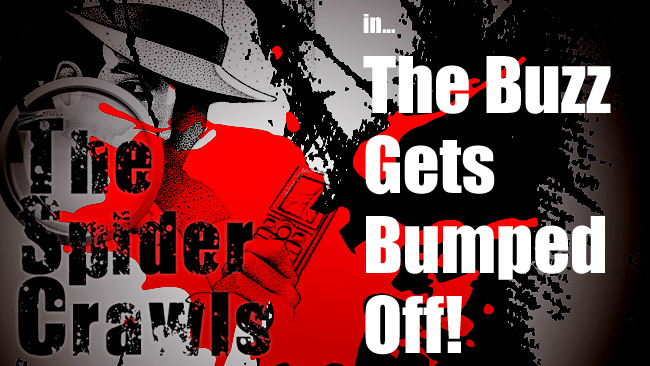 Fans of pulp fiction (the genre, not the Quentin Tarantino movie), search marketing goes hard-boiled. The Spider Crawls does the detective work in "uncovering the creative" needed for crafting a cunning campaign online.

As you may have seen, the BV Buzz newsletter has undergone a redesign. The new layout features the familiar cast of characters, but "rebooted" for the 21st century. It's our sincere hope that The BV Buzz becomes an entertaining resource for educating you, the business owner in the ways of the Internet.

Who Knows What Lurks...
About The Spider Crawls, the name takes its cue from the pulp fiction magazines published during the early 1900s. Featuring characters like The Shadow, Doc Savage and The Green Hornet, magazines like "Argosy," "Amazing Stories" and "Black Mask" pumped out illustrated novel-length stories of the bizarre, the supernatural and the just plain weird.

Hitting the height of their popularity during the 1930s, rising production costs and paper shortages due to World War II, as well as new forms of entertainment, caused a steady decline and eventual collapse of the industry. Of course, nothing ever really goes away, as most of these stories can be found today in both traditional or digital form.

Those Thrilling Days Of Yesteryear...
Seeing that many of the pulp stories featured detectives, as well as realizing search marketing required a lot of detective work, I created The Spider Crawls as a forum to document my investigations. "Like a search engine spider, I scour the Internet for information. Sometimes, it ain't easy and I end up getting bruised and battered, taking one on the chin. Other times, I get my prize, only to find out it ain't the pretty promises of prosperity."

Pushing the P.I. patter aside, I've had to be resourceful, cunning and creative to stay ahead of the villain (the villain being time). To accomplish this, I've steadily collected a number of resources online that aid me in besting the villain. Much like those detectives of the past, these resources could be on the up and up (white hat), or from the shady underworld (black hat). The Spider Crawls hopes to make the distinction.

Stay Tuned for the Next Exciting Episode...
Make no mistake, SEO, SEM and Social Media remain crucial elements of building an online marketing campaign. Rather than featuring them separately, The Spider Crawls hopes to encompass all three and focus on the creative process involved in researching, developing and launching a campaign.

In addition to the usual online marketing stories, we'll also cover such topics as:

As I do value feedback, please feel free to provide comments on my blog on areas of interest, current events, recent tech innovations or any topic you would like this Internet gumshoe to investigate. No job is too big. No topic is too small.