Social media has come to represent a company’s voice. In socialites’ eyes, a company’s posts represent its values, morals, beliefs, and company culture. Needless to say, this is why it is crucial you are putting the right person behind your social sites to embody your company’s mission and vision. One false move and your company branding could be put in jeopardy. This was the case in the following social mistakes. Take note, and don’t be that person!

CelebBoutique - Tweeted this during the Aurora Colorado Shooting. We’re sincerely hoping they weren’t aware of the situation going on.

AT&T Tweeted “Never Forget” with a picture of their phone capturing the image of the World Trade Center’s memorial lights. Many grew irate with AT&T trying to take a national tragedy and turn it into an advertising opportunity.

Gap and American Apparel took advantage of Hurricane Sandy that devastated millions by promoting themselves and sales at their stores. Needless to say their marketing tactics did not win anyone over.

Moral of the story, some things are above your brand. Don’t mess with them! It’ll just reflect poorly on your company.

Triple Check Your Logins
Several times employees have accidentally posted something personal on a company page because they failed to check into which account they were currently logged in to. Don’t make this silly mistake. Nobody wants religious, political, moral, or anything heavily opinionated, slanderous, immature, or controversial on their company’s page. This will ruin your brand’s image for certain customers.

Everyone remembers the epic Red Cross tweet from employee Gloria Huang right? Well this situation was both comical and handled in such a great fashion it ended up benefiting the organization. However, others were not as lucky. 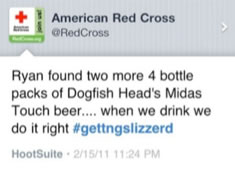 KitchenAid experienced this when an employee posted slanderous comments pointed at the current President of the United States, Barack Obama. 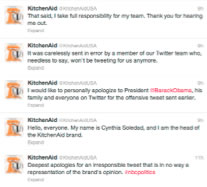 Flipping it around a little bit, be weary of employees intentionally posting things to hurt your social accounts. 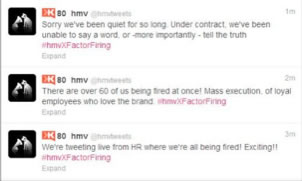 HMV was facing tough times and needed to downsize. The company’s marketing director had limited social media knowledge and failed to alter passwords and logins before letting some employees go. HMV’s community manager decided to tweet during the company HR meeting under the hashtag #hmvXFactorFiring. The tweets were blasted worldwide. They experienced over 700 tweets being sent about the situation in the first 30 minutes.

Bottom line, be careful to whom you trust your social media pages. Emphasize for them to double and triple check that they are posting under the right account. Make sure they are loyal employees that can relay thoughts in the most professional manner possible.

Keep Calm and Diffuse Wisely
Handling backlash and social media complaints revolves around swift responses and professional demeanors. Arguing with your customers publicly via the internet is never in anyone’s best interest. You’ll only end up losing more customers in the long run.

In the below photo, a pastor indicated on their receipt that the waitress at AppleBee’s (see Feb 1st , 2013 posts) shouldn’t receive more than her donation to God, so she cancelled the entire tip. Baffled, the waitress posted the receipt on Reddit.

As a response, the company fired her for violating customer privacy and began issuing auto replies of the same message to all of those that commented in anger on the post. Not only did that signify that they were not reading comments or caring, but that they genuinely had no concern over the matter.

They additionally deleted the post and tried to ignore the situation only resulting in even more bad PR. To top it off, they had posted a receipt two weeks prior to this event with a compliment on it. Customer privacy was obviously not too big of a concern then. 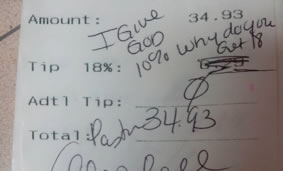 Nestle got a lot of bad PR from Greenpeace last year due to their deforestation practices in search of palm oil and paper products. On Nestle’s social media pages, primarily Facebook, Greenpeace posted all kinds of attacking comments, videos, etc. eluding to the horrible practices the company condoned.

Instead of diffusing the situation and replying back to individual comments, a representative avoided the problem completely. They posted that anyone with altered and degrading Nestle logos as their profile photos will have their comments deleted from the company page. They even lashed back at customers’ comments and indicated that they didn’t care if they lost customers over it. 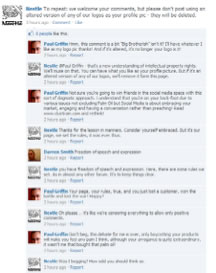 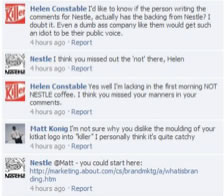 Both of these instances indicate extremely poor crisis management skills, but Nestle’s is disastrous. Despite their social media manager apologizing in later posts, this cost them a lot of damage to their brand. The surplus of stinging comments clearly indicated that they were frustrated with their followers and not willing to put any work into resolving the issue at that point in time.

Conclusion
The point of the matter is that social media is your direct tie to your customers. How you post, respond, and handle issues directly reflects on the company and its image. Keep a manner of professionalism, keep it lighthearted, secure, and don’t ignore your fans. They do more for you than you think!