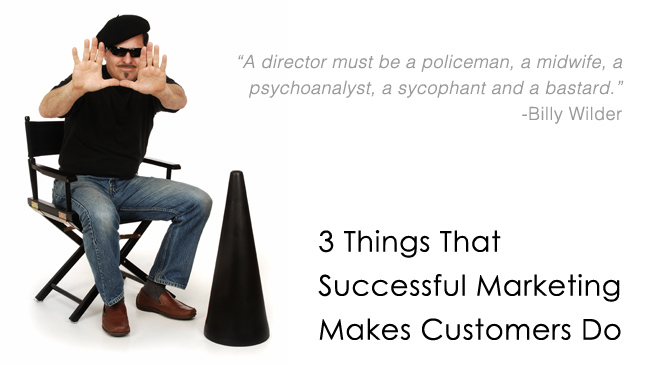 You want customers. Loyal customers. Long-term customers. Creating fanatical devotion to a brand requires thought; thought that leads to emotion which ultimately results in action. Just as a director controls the action in a film or theater production, so too can a marketer control the action of their customers.

Ready. Set. Action! The performing arts industry is home to a myriad of personalities. Never a dull moment passes in pop culture when one of these noteworthy individuals wants attention to promote their upcoming film/tv show/song release. How they go about it varies, but their approach usually involves three things that produce a rabid fan base.

As success does not hinge upon appearing on TMZ, all marketers can incorporate the following three things into their campaigns:

Make them think
The first step in gaining a customer is to make them think. Make them question their preconceived notions about your product or industry. How? Educate them with knowledge previously unknown to them. Shock them with unbelievable, yet convincing data supporting your claims. Drastically turn their world upside down.

You make think that exaggerated, but we live in a world where we are constantly bombarded by noise 24/7; smartphone to tablet, tablet to desktop, desktop to television. Your message swims upstream against a constant flow of media. To get a potential customer to think your way, that message needs a commanding presence. Make that presence loom larger in the public eye by then adding the next concept.

Make them feel
Emotion plays a huge part in the success of a marketing campaign. Once a message goes from the head to the heart, the bond between company and customer becomes stronger, almost unbreakable. Rage, shock and compassion reign as the top 3 emotions upon which to capitalize. Look at the recent Miley Cyrus spectacle as proof of making an emotional connection. The Internet lit up in real-time with raging commentary about her performance on the VMAs.

Shocked watchers couldn't believe what they were seeing. Most predicted the end of her career, yet she added over 200,000 new friends/followers on both Facebook and Twitter. Does that mean you need to add twerking to your marketing mix? If it produces the results you desire, I'd say have at it.

Make them act
Once you've connected emotionally with a customer, getting them to perform a desired action is almost a no-brainer. Using the following equation,

we can see all three harmoniously connected. When intertwined, the resulting process should produce the desired ROI from a marketing campaign. Here's how to go about it.

Using a reverse approach, start with the end goal/action in mind. Then ask yourself, "What do I want potential customers to feel about my product, service, company or industry?" Once you have an emotional focus in mind, you can then research and develop the supporting materials that will best trigger that feeling. Remember, that message needs significant collateral to support its uphill battle. Without x, you'll never get to y or z.

Think. Feel. Act... Marketers should take a course in improv or acting as I believe the thought process to be similar. I'd mentioned how a director wields his control over a production. Most directors start out acting. As an actor, he or she wants to connect with an audience, whether through film or live theater. A marketer wants to connect with a potential customer, whether through print or interactive media.

Just remember, the process before the performance will determine the level of connection.

SocialPlus Reviews Ways to Use Instagram To Promote Your Business